Israel as the Burning Bush 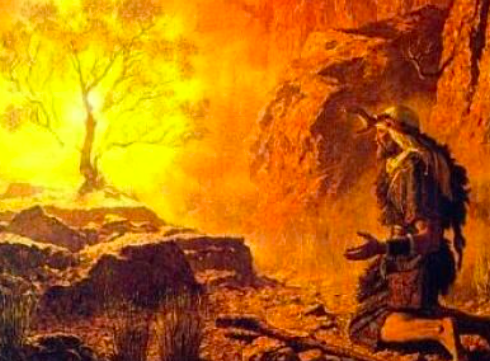 The LORD said to Moses in Midian, “Go back to Egypt, for all the men who sought to kill you are dead.” (Exodus 4:19)

Such good news is conveyed by God to Moses in this week’s Torah portion. Of course this is not the beginning of this story, so let’s remind ourselves what happened earlier. Moses was forced to flee from Egypt to Midian after he killed an Egyptian who was beating a Hebrew man. He made this decision when he found out, as he was trying to break up two other fighting men – this time two Hebrews – that the news about his deed had spread out and that the Pharaoh wanted to catch him and kill him. In the land of Midian Moses stops by a well, where he defends the seven daughters of priest Jethro from the local shepherds. Moses waters their sheep and then he goes back to their father’s house with them. He decides to stay there, and Jethro gives him one of his daughters, Zipporah, as his wife. Soon she gives birth to his first son, Gershom.

Then God reveals Himself to Moses in a burning bush, where He entrusts him with the mission of freeing the people of Israel from the Land of Egypt. The burning bush has interesting symbolism in rabbinic literature. Rabbeynu Bachya regards the burning bush as a revelation that our nation, despite all its hardships, is eternal: “The burning bush conjures up the image of a lowly nation in iron fetters, constantly aflame with suffering. Threatened on all sides, yet worthy of relief, the Jewish people continue to endure miraculously among their enemies.” We can also find this interpretation in Midrash Shemot Rabba: “Just as the bush burns out but is not consumed, so too, Egypt cannot destroy the Jewish people.” Another interpretation says that from the burning bush we learn that there is no place devoid of the Divine Presence. There is also an interpretation which says that burning bush represents the endurance of holiness burning among the “thorns,” i.e., the profane.

Moses says goodbye to his father-in-law, he takes his wife and sons, leaves Midian and sets out on a journey back to Egypt.  Everything seems to be headed in the right direction but suddenly a bizarre thing happens:

At a night encampment on the way, the LORD encountered him and sought to kill him. So Zipporah took a flint and cut off her son’s foreskin, and touched his legs with it, saying, “You are truly a bridegroom of blood to me!” And when He let him alone, she added, “A bridegroom of blood because of the circumcision.” (Exodus 4:24-26)

Did God decide to kill Moshe? Doesn’t this seem absurd? God appoints him as a prophet and savior of Israel, and soon after that He decides to kill him? The traditional Rabbinic reply to this question states as follows: Yes, since Moses committed a sin – he neglected the duty to circumcise his son. The Hebrew text, however, is unclear as to who is who. So we do not know, for example, whether God demanded the death of Moses or of his son, Eliezer, who was born shortly before his journey to Egypt. The rabbis agree that the cause of what happened was the delay in circumcising Eliezer but they give different reasons why it happened. Rashi provides an explanation for the behavior of Moses, who, besides the fact that he had to take care of practical, journey-related matters, was also weighing it up rationally: If I circumcise my son now and we embark on our journey to Egypt, his life will be endangered for three days. And, since we will be traveling, the danger will be even greater.  Ibn Ezra, on the other hand, claims that the Hebrew word yifgeshechu, translated as “encountered him,” implies that God struck Moshe with some serious disease; because of that Moshe was unable to circumcise his son and that’s why Zipporah had to deal with it.

If God really wanted to kill Moses, then Zipporah changed the course of history by correcting his mistake. She would be one of those biblical figures, next to Joseph and Esther, whose actions determined whether the entire Jewish nation would survive or not, and thus determined the fate of the entire world as well. This would mean that secondary characters can also play a key role in the history of the world and can save it with one right deed. Another lesson we can learn from this story is that no one, even the righteous, to whom God entrusts a great mission, has the absolute protection of the Eternal. Therefore, our Biblical history is yet another story emphasizing the importance of human vigilance and responsibility.