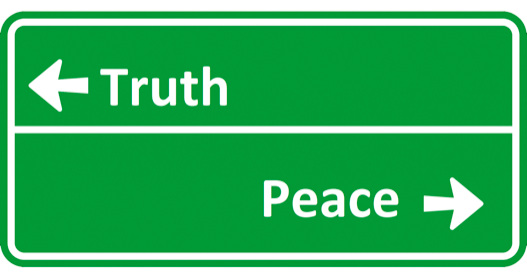 “No one is more hated than he who speaks the truth”, said Plato. “Cherish those who seek the truth but beware of those who find it”, said Voltaire. “The truth is, everyone is going to hurt you. You just got to find the ones worth suffering for”, said Bob Marley.

Is telling the truth always good or necessary? Is telling the lies always wrong? Many books were written on these topics, many people have tried to give an ultimate answer to it. Soon after this problem seems to be resolved there comes another answer to it. Also our Torah portion for this week touches this subject. It tells us the story of Joseph’s brothers who openly lie to him:

When Joseph’s brothers saw that their father was dead, they said, “What if Joseph still bears a grudge against us and pays us back for all the wrong that we did him!” So they sent this message to Joseph, “Before his death your father left this instruction: So shall you say to Joseph, ‘Forgive, I urge you, the offense and guilt of your brothers who treated you so harshly.’ Therefore, please forgive the offense of the servants of the God of your father.” And Joseph was in tears as they spoke to him. His brothers went to him themselves, flung themselves before him, and said, “We are prepared to be your slaves.” But Joseph said to them, “Have no fear! Am I a substitute for God? (Gen 50:15-19)

Joseph cried because he immediately noticed that his brothers were lying. This lie was nothing compared to what they had done to him when they sold him to Egypt many years earlier. In his eyes, the brothers’ lie was a rather pathetic expression of their fear, helplessness and sense of guilt. How do we know about this? The rabbis give us some hints. According to Rabbi Luzatto:

He understood that the brothers had instructed the messenger what to say; otherwise Jacob would have told himself. Joseph therefore wept at seeing the tragic state of his brothers, going in fear of their lives and forced to such shifts to stave off his vengeance.

There is no reason to believe that the brothers told their father the truth about the sale of Joseph: the Torah does not mention that Jacob found out about it. Nahmanides explains it as follows:

It seems to me that the plain meaning of the test is that Jacob was never told of the sale of Joseph by his brothers, but imagined that he got lost in the fields and was sold by his finders to Egypt. His brothers did not wish to divulge their misconduct, especially, for fear of his curse and anger. […] Had Jacob known it all the time, they should have begged their father to command Joseph to forgive them […].

The idea that Joseph himself told his father about it also seems improbable. First, he had forgiven his brothers and saw a divine plan in it. So he had no reason to take revenge on his brothers, and it would be revenge to disclose this information to his father, Jacob.

I have already mentioned several times the well-known comment that the family stories in the Book of Genesis are predominantly the stories of dysfunctional families; that these stories often tell us how not to deal with each other and that they capture aspects of ethics that are very difficult to codify into a moral or religious law.

However, let us consider what the case of the lies of Joseph’s brothers will look like in the context of the ethics of Judaism. The Torah does not absolutely forbid lying as such. The 9th commandment of the Decalogue, lo taane ve’reacha ed shaker, commonly translated as You shall not bear false witness against your neighbor, is restricted to bearing a false testimony in order to harm someone. Its literal meaning is: You shall not answer your neighbor, false witness! A false witness is one whose testimony may even be theoretically true, but has no basis in his experience, e.g. they say that they have seen something but in fact only heard about it, etc.

The rabbis, however, put many restrictions on what we can say to others: for example, revealing private information about others (gossip – rekhillut) even if true, is prohibited, unless revealing this information can protect someone else from abuse or harm. Obviously, deliberately misleading others (geneivat da’at) through “smooth speech” or seductive language is a violation of Jewish norms of speech and prohibited (however, trying to persuade the people who are informed that they are being persuaded to buy or believe something is not considered misleading and it is allowed.)

But what do the rabbis say about our story? One of them, Rabbenu Bahya Ibn Pakuda, tells us that we may deviate from the literal truth in order to preserve peace between people. This may seem obvious to us today but it is good to know that this view is well-established in our tradition. Joseph’s brothers, tormented by their sense of guilt, felt their lives were in mortal danger. Our Sages regarded their conduct as warranted on the principle that truth has sometimes to be subordinated to more important values.

Some say that this means that truth, no matter how important, is not an absolute value and sometimes it must give way to other values and two of them sometimes are more important: peace and life. I believe that this opinion confuses the truth as such, understood by philosophers as accurate cognitive representation of reality with the mere act of ‘telling the truth’ assessed from the perspective of ethics. Telling the truth is sometimes inconvenient, sometimes gravely dangerous but sometimes necessary, even if it ensues sacrifices and sufferings, necessary to begin something new, to say goodbye to something we don’t want anymore or to put reality back on track.