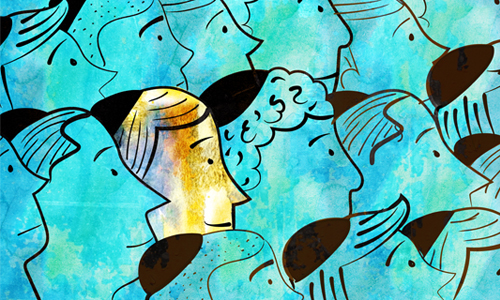 How does the behavior of individual people determine the life of human communities? This very interesting question, which is especially relevant today, has been tackled by whole generations of philosophers dealing with social relations, by social scientists, social psychologists and other social sciences specialists throughout the centuries. Of course this question is extremely vague and there is no clear-cut, short answer. It can also come in different versions and be phrased in different ways. This question is in fact stating a broad problem, which can yield many different and interesting answers. However, based on common sense and without conducting any studies we can state that indeed the actions of individuals can and sometimes do deeply influence the life of entire human communities, especially when those individuals have been granted power or authority.

In this week’s Torah portion we find various threats made by God against the Israelites – threats of punishments for not obeying the Torah’s commandments. We find similar admonitions in the second paragraph of our daily prayer Shema and Ve’ahavta (especially in the passage beginning with Hishamru lachem pen yifte levavchem…, which means: Take care not to be lured away to serve other gods and bow to them). However the only punishments this prayer describes are drought and a lack of crops – and as a result the punishment of famine and exile from the Promised Land. This week’s Parasha deals with this issue in more detail. Besides famine and exile, the punishments for not obeying God’s laws are: dread, exhaustion, fever, blindness, ruined health (Leviticus 26:16), plague, war (26:17; 23-26) and wild beasts… [that] shall bereave you of your children and wipe out your cattle. They shall decimate you, and your roads shall be deserted (26:22.)

At one time progressive rabbis viewed this part of the Shema prayer and the above mentioned verses with some reluctance, perceiving them as superstitions or perhaps even magical beliefs. How should these concepts be understood in modern times so that we don’t reach similar conclusions? Certainly not as meaning that if we for example lie, then rain won’t fall and we’ll be devoured by wild animals. This interpretation is based on a faulty premise – namely the conviction that the Torah is comprised solely of the Decalogue and maybe a bunch of other moral commandments and that breaking one of those norms is enough to receive this kind of punishment. In reality the Torah is a coherent system regulating all basic aspects of human life, both individual and social. If we approach this problem holistically, we quickly notice that the destruction of the system of norms regulating social life can have and indeed often has disastrous consequences such as famine, epidemics, social unrest, chaos or ultimately – war.

In ancient, polytheistic societies of the Middle East it was commonly believed that deities wielded their power within a certain local radius and they could punish every person or group of people living in a given country or in a given area. Some societies believed that the forces of nature had an advantage over the gods and therefore they were the ones that should be worshipped. Ancient Israelites had contacts with these communities and their beliefs, and it appears that local Canaanite tribes spoke very similar languages. Therefore the Israelites were always tempted to placate the other gods as well, even if “just in case”, to avoid punishment.

However, serving other gods meant not only participating in religious rituals of other, local tribes. It also meant accepting and adopting the lifestyle of foreign peoples surrounding Israel and the norms followed in those societies. As a result the rules and norms governing the Israelites’ life became inconsistent. Inconsistent social norms lead to social divisions and a complete relativization of norms, sometimes of all the norms, which in turn can lead to the disintegration of the social life of a given community, to conflicts, and even fratricidal wars. The Hebrew Bible points to this problem clearly and (at least) three times, stating the causes of murder, chaos and fratricidal slaughters described in the Book of Judges:

All this was caused by a lack of a consistent system of norms and the inability to reinforce them. We’ve seen all this many times over the course of history in the lives of various nations. We see it today as well, here and there, fortunately mainly in the sphere of ideology – we are all aware of the deep ideological divides in our societies. We’ve learned to live with this, we’ve “normalized it”. Although it still scares us sometimes, especially when suddenly it turns out that there are not two, but ten or more ideological fronts fighting with each other.

Fortunately in most of our societies the rule of law is established strongly enough, thanks to which people miraculously do not kill each other for trivial, small things. However, there is nothing wrong with seeking consistency and it doesn’t have to entail the domination of one of the sides. What can we do in order to make our societal life less (ideologically) conflicted? We must start with the most basic thing: we must learn (again) to listen to each other. This is not “a matter of choice”. If we want to live peacefully with others, we must learn to listen to the opinions and beliefs of other people. We don’t have to agree with them, but we must at least try to understand them, to be able to analyze them. The human world is not black and white and “on the other side of the barricade” there are also educated, intelligent and logically thinking people. I believe that when it comes to our deepest human convictions and to really essential matters, there is more that we as people have in common than what sets as apart. However, we will never reach this depth and we will not discover it if we won’t be listening to each other and won’t be talking to each other.