At the beginning of the 19th century, Jews constituted almost a half of the city’s population, and until the middle of the century Lublin itself remained the second largest, after Warsaw, center of the Jewish population in the Kingdom of Poland. Between 1819 and 1864 their number in the city increased from 4,771 to 12,922 people, and the percentage of the total population increased from 48.3% to 59.2% 13. In the year preceding the outbreak of World War I, Lublin was inhabited by over 38,000 Jews, constituting almost half of its entire population. The expanding community was deprived of most of its civil rights until the 1860s. In addition to limiting the place of residence (the tsarist authorities sanctioned the former privilege De non tolerandis Judaeis, creating a separate Jewish district in the city), the prohibition of purchasing land and performing certain professions, Jews paid separate, higher taxes than the rest of the population (e.g. kosher, recruiting), not they had voting rights and could not perform public functions. The lifting of these restrictions in 1862 led some Jews to leave the Jewish district and live in districts of the city that were previously inaccessible to them (especially the north-eastern part of the Old Town and Krakowskie Przedmieście – the main street of Lublin), revived – although to a rather limited extent – Jewish contacts. -christianism and to activate economic life and industrial development 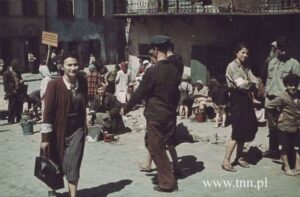 It should be noted that these changes concerned only the richest and most strongly assimilated part of the Jewish population, constituting only a small percentage of the total. Most of Lublin’s Jews still lived locked up – though not compulsorily but voluntarily – in the economic, moral, linguistic and intellectual ghetto. Compared to other large cities in the Kingdom, this community was generally poor, traditionally religious, poorly educated and almost completely isolated. Its conservatism and backwardness were fostered by the traditionally strong Hasidic influence in the city.

Certain changes in this image began to become visible only at the turn of the century. During this period, there was a reevaluation of the existing criteria of Jewish self-identification – a departure from perceiving one’s own status in terms of a religious group in favor of a national minority, which is aware of its individuality. It was then that new socio-political trends began to reach Lublin, activating Jewish public life on an unprecedented scale. The earliest new believers were Zionism and the workers’ Bund (the first structure of this party was established in the city in 1903). Private schools for Jewish girls, modern charity institutions (including a modern hospital at Lubartowska Street and an orphanage at Grodzka Street) appeared, and the religious community became active, quickly becoming a place of disputes between the Orthodox majority and the few still supporters of the new trends. 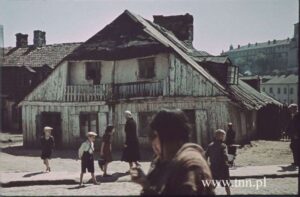 However, the real revival of social life took place only after 1915, when Lublin was under the Austro-Hungarian occupation. The liberal attitude of the new authorities intensified the activity of Lublin Jews in many fields. In 1916, there were already 15 private Jewish schools in the city (including 3 junior high schools), the first newspaper was established (the monthly “Myśl Żydowska” published in Polish), an amateur theater led by Jakub Waksman and the first public library operating at the religious community appeared. Jews also sat on the city council. 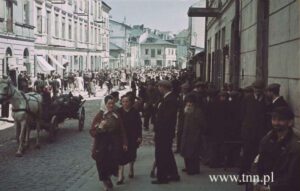