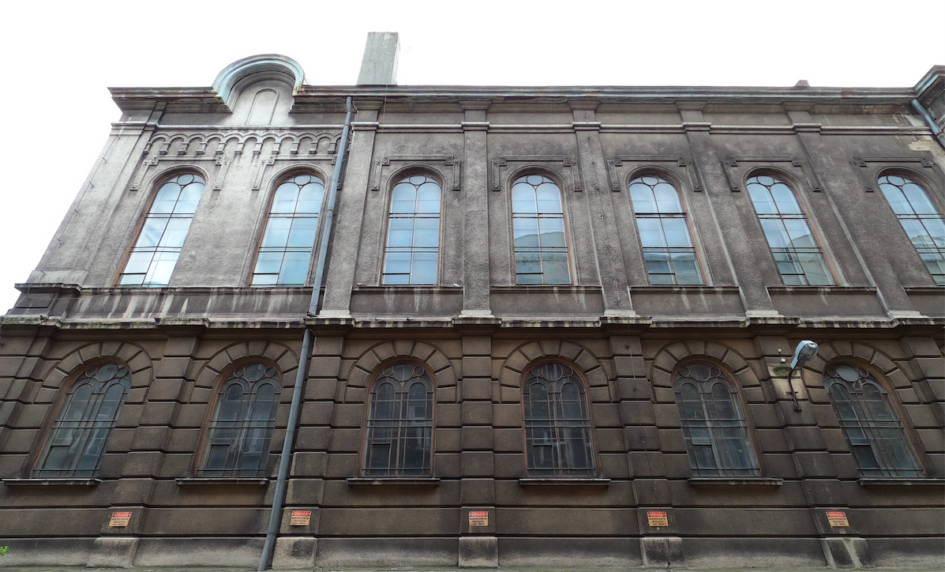 My hometown, Przemyśl, had a very vibrant Jewish history. Here are some historical facts in a nutshell.

In 1875, the first Zionist organization was founded under the name of Ishuv Palestinian. In 1884, the supporters of the tzaddik from Bełz founded the Machzyke Hadas association, and in 1893 a branch of the Chibat Zion party was launched. In 1905, a branch of the Jewish Social and Democratic Party was established among the workers, while in 1906 the Poalej Syjon party started its activity. In 1910, the Jewish Drama Club was established, and in 1918 – the Juwal Jewish Music and Drama Society. At the end of the 19th century, Jews owned three financial institutions in the town: the Banking Association, founded in 1882, headed by Juliusz Reiniger; The Żyrowe and Credit Society, operating since 1890, with its president Maurycy Krug, and the Merchant Advance Society, established in 1895, headed by Simon Bernstein.

In 1890, 110 towns belonged to the Jewish community in Przemyśl. In 1900, 17 321 Jews lived there. It was the most numerous Jewish community in the present-day Podkarpackie Province, the fifth in the whole of Galicia. It had, inter alia, three religious schools, one secular school, 4 foundations, a health insurance fund and a hospital. Acted here, among others Jewish Folk Kitchen and the seven-class Jewish school of Jesod ha-Torah. In 1902, the Toybenhal Jewish People’s University was established, and in 1912, a group of the Bernard Goldman, which led, among others Polish language courses, book rental and magazine reading room.

At the beginning of the 19th century, there was also a significant Hasidic community, initiated by the activity of the tzaddik Mendel from Przemyśl. The city was the birthplace of Mosze Teitelbaum (1754–1841), the later famous tzadik in Ujhely in Upper Hungary (now Slovakia), the founder of the tzadik dynasty. The local Hasidim were led by tzadiks: Mejer Frenkiel, and then his son Cwi Hirsz, then Menachem Mendel, Jecheskiel Szraga Halberstam from Sieniawa, Abraham Jehoszua Heszl Koreach, and after 1860 Josef Mosze Teicher, who moved here from Żołynia. In 1919, tzadik Jozue Szapiro from Rybotycze, son of Cwi Elimelech from Błażowa, settled in Przemyśl, he founded a house of prayer on Kopernika Street. In the interwar period, Przemyśl Hasidim from Sadogóra was led by tzadik Mordechaj Shalom Josef Friedmann (1897–1969), a descendant of Dow Ber, residing in Tel Aviv from 1939. The Hasidim from Bełz also had influence. In the interwar period, the tzadik of Bełz Aron Rokeach (1880–1957) materially supported the Association of the Israeli School Bejt Talmud in Przemyśl. 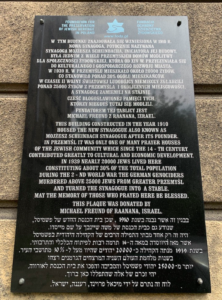 At the beginning of November 1918, the Jewish People’s Council was established in the town, which replaced the existing authorities of the Jewish community. During the Polish-Ukrainian fights for the city, the Jews remained basically neutral, although both sides suspected them of favoring the enemy. Against this background, anti-Jewish riots took place on November 11, 1918. They also continued in the following days. As a result, a Jew was killed, 10 were wounded, and over 140 Jewish apartments and shops were plundered. However, at that time, many Jews publicly declared their pro-Polish sympathies. Many of them died in defense of Polish borders in 1918–1920, including the war with the Bolsheviks in 1920. Józef Mantel, a Jewish attorney, signed one of the agreements on behalf of the Polish Socialist Party, ending the Polish-Ukrainian struggle for the city.

In 1921, the number of Jews reached 18,360, ie 38.3% of the total population, while the entire poviat was inhabited by 22,427. During the next 10 years, the number of Jews in the town decreased by over 1,000. people in connection with migration and emigration, including to Palestine. In 1928, Dr. Henryk Reichman was elected deputy mayor, which caused protests from the local National Democratic Party.

In the interwar period, there was a Farmers’ Association of the Jewish Agricultural Society in Przemyśl. Szymon Morgenroth was at the head of the Merchants’ Association, uniting 512 people in 1939. The Association of Jewish Craftsmen, Jad Charuzim, chaired by Leon Nussenfeld, had about 250 members. Baker’s journeymen were associated in the Chesed Uemed Charity Helpers Association. There were also: Union of Professional Workers at Macy’s Bakery, Association of Jewish Needle Masters, Union of Professional Tailors, Association of Butcher Workers, Trade Union of Jewish Traders and Trade Union of Jewish Private Officials, which in 1938 had 209 members. The intelligentsia met at the Jewish Social Club and the Scientific Reading Room. The Merchants’ Association established the Cooperative Merchants and Industrialists Bank. In addition, there were also: Discount Society, Credit Union (with 988 members in 1932), Credit Banking Society and Banking Association for Trade and Industry, as well as Spółdzielczy Bank Handlowy, which in 1938 had 490 shareholders, and Gemilut Chesed credit unions.

There were two cemeteries in Przemyśl: the old one from the 16th century and the new one, established in 1822. Until its devastation, the older one had at least 27 matzevot from the 17th century, with the oldest one from 1574. There was also a tombstone of Samuel Szmelke from 1628. r., chairman of the Przemyśl kehilla and the senior of Przemyśl Jews. The community and associations also owned other buildings that served as religious and educational facilities: ritual baths, kosher slaughterhouses, houses for the poor, an orphanage for Jewish children, and a co-educational gymnasium. The Handicraft Workshop Society ran a female tailoring school, and the Jewish Society of the People’s and Secondary School – a co-educational gymnasium. The religious school was also run by the Association of the Israeli School in Przemyśl Bejt Talmud, as we said – financially supported by the tzadik Aron Rokeach from Bełz. There were 4 foundations for the poor: Mojżesz Schiffer, Fischler Goldman, Perla Tombak and the foundation for poor Jewish youth.