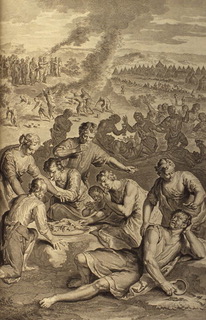 To set the stage: Van Nuys, one of the northern neighborhoods of Los Angeles, Monday June 1, 2020, around 5 pm. A journalist from a TV station is talking with several people gathered in front of a grocery store, all of them are African-American, two of the men are holding shotguns. Just like many others in the neighborhood, they are protecting their businesses from the raids and looting which have accompanied the demonstrations in reaction to the killing of George Floyd by a policeman in Minneapolis a week earlier. While she is talking to one of the wives of these men, a car drives up and several individuals – both white and black – get out. Local business-owners know who they are; they know they’re not from here and they’ve come to rob a local jewelry store. The looters are trying to “negotiate” something, but they are afraid of the armed residents of the neighborhood and they don’t really know what to do; they seem baffled. After a couple of minutes the police arrive and the looters start to run away on foot. The policemen who have just gotten out of their police cars set out to chase them but two of them approach the armed business owners.They decide to detain them and handcuff them. The TV reporter screams: “It’s not them! These are good people, owners of their stores, they’re defending their property!” After a few-minutes-long conversation the policemen set them free.

This is just one vignette portraying the reality in many cities in the United States in the last couple of weeks. Just in Los Angeles, besides desecrated synagogues, many Jewish stores and other businesses have been looted.

Besides the looting of stores and local businesses the widespread protests were also accompanied by acts of pure, mindless, barbaric destruction, such as setting on fire and desecrating churches and synagogues, cutting up Torah scrolls and stuffing talitot in toilets, devastation of monuments and the burning down of the bookstore Uncle Hugo’s and Uncle Edgar’s in Minneapolis. There were also murders. Dave Dorn, a 77-year old retired African-American policeman from St. Louis, who served in the police force for 38 years and came to the city to protect one of the jewelry stores, was killed. By Tuesday, June 2nd at least 11 people were killed in connection with the riots that accompanied the protests.

Whether the protests can be described as peaceful or not the protesters themselves have expressed the opinion that sometimes a peaceful protest is not enough. Some of the press, which seemed to support this position, have said that the underlying reason is the widespread injustice present within American society.Finding an objectively valid definition of justice, since there are many different concepts of justice, can be difficult and we won’t easily find a common denominator here. For example, are we talking about a traditional Judeo-Christian concept of justice, which says, that justice is when people simply bear the proper consequences of their moral choices and actions? Alternatively, perhaps we are referring to the Marxist vision of justice, which understands justice as a matter of an equal distribution of wealth in society? Regardless of how we choose to define justice, the source of the anger and of the ensuing events was, no doubt, a sense of constant injustice among people of color in the United States of America.

This is not the forum to discuss, in detail, the issue of racial inequality in the USA. The issue is very complex, and caused by many historical, cultural and socioeconomic factors and it cannot and should not be reduced to a single-factor analysis – such as, it’s racism and nothing more or to a simple (neo)Marxists concept of “the oppressors and the oppressed.” Candidly, I believe these simplistic theories should and need to be discarded absolutely and irrevocably. Binary sociological concepts from the 19th century have no cognitive value. Human lives are quite too complicated to reduce social reality into two simple categories. The same goes for concepts in which society is viewed as nothing beyond a collection of different identity and interest groups constantly in struggle and at one another’s throats. In fact, such simplistic explanations don’t really explain anything. They present an extraordinarily simplified view of reality and as such are very harmful. These binary, us against you, explanations are self fulfilling! They, quite obviously, strengthen divisions and cracks in societies, which in turn, lead to the escalation of mutual hostility and violence. We know these kinds of concepts from our own history, which is, in part, a history of anti-Semitism. Dividing people into groups according to criteria, that we’ve come up with, and then defining such groups as possessing certain inherent traits de facto amounts to creating new stereotypes and prejudice.

In order to fix anything within a society we need an accurate, specific and in-depth diagnosis – a multivariate analysis of the problems existing based on empirical data; not an ideologically tainted pseudo-empiricalanalysis which says that all the complex social phenomena, including injustice, are caused by a single factor, like racism. Human societies are at least as complicated as an airplane or a helicopter. They cannot be repaired by means of slogans, emotions or simple proclamations. Slogans, etc. can act as the driving force for such a repair but they must be focused on driving repair rather than on destructing the existing reality.

More gravely, such simple, single factor analysis or binary concepts describing social reality give those who believe in them the illusion that they have understood everything. Which is very easy to believe since you only have to think one thing: you have ‘one thing answers’ to everything. How delightfully simple! However, will inevitably lead to failure to fix any problem that necessitates complex understanding and solutions.

It is not my purview, nor my aim to present a full, comprehensive picture of the situation with ultimate solutions to the problems; Instead, I will focus on two related aspects: on anger and chaos. Anger breeds chaos and chaos breed anger. In this case, chaos is an objective representation of the inherently subjective anger. I believe that the anger caused by the events in Minneapolis and by the reaction of the law enforcement system was understandable. But a brutal, public expression of any kind of anger is unacceptable. If I am upset and frustrated and I throw a paving stone at someone because of it, I should be punished for it. More patently, if my wife has cheated on me I have the right to be angry, I do not have the right to beat her because of it. Period.

Anger is something we’ve always dealt with as humans. Lack of control over anger is one of the primary sources of evil in the world and it leads to chaos. It leads to situations in which later we’d like to “take back”. It was this lack of control over internal anger, stirred up by a sense of injustice, that led Cain to kill his brother Abel (Genesis 4:5-6 – the Hebrew verb from the root חָרָה which describes Cain’s state of mind before the murder means to be furious, angry with, hot or burn). It is the lack of control over our social reality – a leniency towards forces of chaos – that leads to various Divine punishments such as the plague, war (Leviticus 26:17;23-26) or wild beasts [that] shall bereave you of your children and wipe out your cattle. They shall decimate you, and your roads shall be deserted (Leviticus 26:22), something in which I wrote about in my drasha three weeks ago. In fact, I’ve already written about anger, chaos and order many times. Without the ability to control anger and to stop the forces of chaos there is no chance for justice, nor any ideal of societal life.

Furthermore, it is patently untrue that some stages of chaos are necessary in order to establish some kind of a new order. This is only a bitter-sweet rationalization created post factum, after we’ve managed to bring under control the forces of chaos and people have started to believe that the newly-established order is better than the previous one. Yes, anger can play and often plays a positive role in this entire process: it can be a spark. A spark can light the gas burner on your stove or it can light a conflagration. It can begin a process that will ultimately bring a positive change but it can also start an avalanche that will end in an ultimate disaster. Thus, again, it has to be brought under control as soon as possible and is NOT, by any means, always necessary.

In this week’s Torah portion we have two instances of human outbursts of anger and dissatisfaction caused by these people’s current situation; The Israelites complaining about the harsh living conditions on the desert, such as the lack of any food other than manna (Numbers 11:4-23) and Miriam’s and Aaron’s evil speech towards Moses because he had married a Cushite woman. Both situations bring Divine anger on the people involved in them. In the first case He is stopped by Moses and in the second one Miriam is afflictedwith leprosy. There is one common theme in both of these situations – the theme of purification, of sanctifying oneself. The Israelites receive their much-desired meat from God precisely under this condition – that they sanctify themselves and purify themselves from anger and negativity (Numbers 11:18). Miriam has to undergo a 7-day quarantine to achieve the same aim. On the other hand, however, the Israelites might not receive their meat if they hadn’t complained. Seeing anger as a spark that can bring desirable results works within this biblical narrative as well. This spark was spotted quickly by Moses, who stopped God’s anger, and thus, saved his nation from further suffering.

Anger and chaos cannot form the basis of any kind of order, nor can they be the source of any principles or any form of order or justice. No justice can be founded on threats. As witnessed in America these past several weeks, anger and chaos self-escalate and lead to more and more destruction. People who tolerate such developments are also accepting all the tragedies and the consequences that have ensued from them. The condition necessary for the existence of any kind of order is to bring these phenomena under control and to sanctify ourselves by separating from anger and chaos. Only then can we start rebuilding that which has been destroyed, only then can we speak rationally and build a better future. A future in which our children will not be judged by the color of their skin, but by the content of their character.*

* “I have a dream that my four children will one day live in a nation where they will not be judged by the color of their skin, but by the content of their character”.

This is a revised version of the sermon published previously at:

which was translated from Polish by: Marzena Szymańska-Błotnicka