The climate change that caused the flood 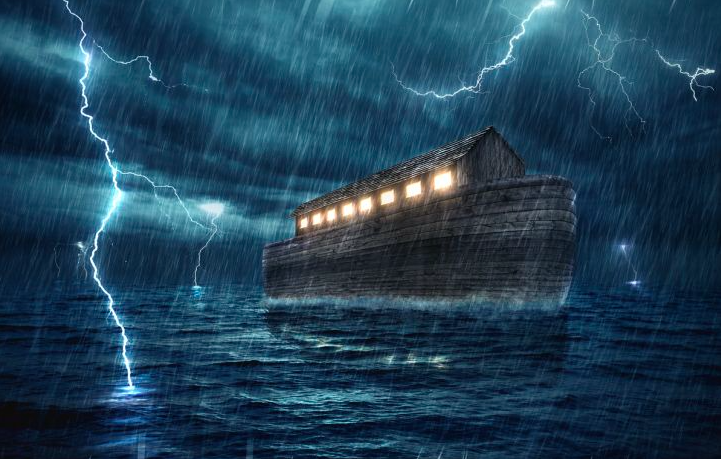 The story contained in our Torah portion for this week can be seen as a metaphor of a great catastrophe in which species were decimated or doomed to total extinction… Only a few of them were to survive, a few individuals of each gender, in order to reproduce and prevent the animal life cycle on the earth from a complete extinction. Does it sound completely unreal today? I don’t think so, it is certainly not beyond the scope of contemporary man’s imagination.

The story of the flood ends with a new Divine promise – the promise of the eternal covenant between God and humankind:

יהוה smelled the pleasing odor, and יהוה resolved: “Never again will I doom the earth because of humankind, since the devisings of the human mind are evil from youth; nor will I ever again destroy every living being, as I have done.

So long as the earth endures,

The above verses can only be understood as a proclamation of faith: as human beings we have no way to verify or falsify them. All we can do is hope that it is true and live with faith that it will, in fact, be so. Nevertheless, people have repeatedly challenged this faith throughout history. The greatest and the most bold challenge to this faith today is posed by climate change.

Climate change is a fact and the one we are experiencing in our times is largely man made. Back in 2018, the Intergovernmental Panel on Climate Change (IPCC) at the request of the UN produced a report from which we know, among other things, a few fundamental things, namely:

Around the same time climate scientists and economists issued numerous analyses according to which it is going to be very difficult and economically challenging to mitigate the effects of climate change, deeming the most optimistic scenario of 1.5 °C (2.7°F) by 2100 almost impossible to implement, for a variety of reasons – for example, we would have to close and eliminate almost entire energy industry we have at this moment, not only in the US and Europe, but in the entire world, and do it by 2030.

However, what none of those reports says is that we have 12 years until “we all die in a giant ball of fire”, as some politicians and media figures constantly suggest. The idea that the world is going to end in 12 years is an incredible misrepresentation of what the UN Climate Panel has actually done.

But let’s pause here for a second and think: from the analysis brought by scientists from IPCC we know that even if we stopped using fossil fuels completely and reduced our global emission to net zero by 2030, the average temperature on Earth would probably still have increased by 1.5 °C (2.7 °F) by the end of the century. It obviously means that the temperatures on our planet are growing no matter what we do. These facts are commonly known and all of this is well documented by geologists.

The last great global warming in the history of our planet happened roughly 55-58 million years ago and it is called Paleocene–Eocene Thermal Maximum. This warming was caused by a massive carbon release into the atmosphere that has been estimated to have lasted from 20,000 to 50,000 years. Geologists estimate that during this entire period, which lasted for about 200,000 years, global temperatures increased by 5–8 °C, from the average earth temperature of 24–25 °C (75–77 °F) of the preceding Paleocene period. This means that the average temperature on our planet might have been at its pick as high as 29-33 °C (84-91 °F), which is about 16-20 °C (27-34 °F) higher than the current average temperature on earth, which currently fluctuates around 13.9-14.5 (57-58 °F)! Both poles were ice free at that time, as in the preceding Paleocene era; the temperatures of Arctic and Antarctic seas were as high as 23 °C (73 °F). The climate of almost the entire planet was tropical; forests covered most areas of our planet, palm trees grew in areas of northern states, like Wyoming, Montana or Canada. How did it affect the animal kingdom? Because of these environmental conditions of that period  an intense evolution of primates took place: The oldest known undoubted fossil primates are about 55 million years old [2][3]. This global warming likely “changed the course of evolution”, as a result of which apes came into being,  from which we, humans, have later evolved. The next epoch, the Eocene, kicked off with a global average temperature more than 8 °C (about 14 °F) warmer than today, gradually cooling over the next 22 million years. Having said that, we are also allowed to say that as living beings we are grandchildren or great-grandchildren of the last global warming.

I am bringing this analysis here in order to put things in a proper perspective and cool down emotions often accompanying this debate. Our planet, and life on it, not only survived but also thrived during much warmer periods than the one we expect to happen. Obviously, the human factor involved in our current situation makes it unprecedented. However, the scenario that things could get out of hand and the earth could become the second Venus as a result of a phenomenon known as the runaway greenhouse effect was found unprobable by scientists in 2013. For this to happen, our whole human civilization would have to emit 10 times more carbon dioxide than we emit today. One of the important factors to stop this effect is life on earth itself, which is capable of absorbing huge amounts of carbon dioxide. Another argument often raised in this debate is that even a global increase of 3°C (5.7 °F) will bring prolonged heat waves, droughts and increasingly common and severe extreme weather events. This may be true, however, it is also true that the global percentage of people dying in natural disasters has decreased since the early 1900’s by 95%.

Climate economists have done numerous analyses of the matter. In economic terms, spending on physical assets on the course to net-zero would reach about US$275 trillion by 2050, or US$9.2 trillion per year on average, an annual increase of US$3.5 trillion. [1] I don’t think any economy in the world can possibly bear that kind of burden. The UN report from 2014 estimated that, if we don’t change anything, the economical impact of global warming by 2070 would be equivalent to each one of us losing somewhere between 0.2 and 2 percent of our income. Juxtaposing these two analyses also brings us some additional context – the necessary context we need in the debate on climate change. The scientists and economists who prepared the reports for the UN knew that the most aggressive mitigation options – like a complete worldwide resignation from fossil fuels in a decade or two – were impossible to implement without ensuing a global economic collapse.

There is no scientific evidence that climate change we are experiencing in our times poses any existential threat to planet earth and life on it. Climate change is a real problem and it is something we should strive to fix but we also need a sense of proportion in this matter. If you tell people this could be the end of the world for everyone of us – which is what existential threat means – you are telling people that we should spend everything on fixing this problem and not bother about anything else.  What poses a real threat – to our economy, and therefore to our societies worldwide, are irresponsible energy policies leading to galloping inflation and financial destabilization of the markets, which happens across the western world due to bad decisions of our political leaders. Calling for complete abolition of fossil fuels is not only irresponsible; it is, in fact, a call for genocide: it has been estimated that if we stopped using fossil fuels today, between 20 and 60 million of people would die from startvation within a few days. Who would be willing to take responsibility for a decision like that? We need to steadily transition to more and more clean energy but it cannot be solely dictated by government fiat or a group of lobbying businessmen: the fundamental solution here is to invest in new technologies (such as hydrogen cars, for example) and improvement of existing technologies (like nuclear energy).

Climate change is not the only challenge facing humanity – everyone realized that during the recent pandemic. Thus, we have to ask ourselves how much we want and how much we actually can spend on mitigating this problem compared to all the other problems we, as humanity, are facing. All of it should be a subject of an open, public, honest, academic and intellectual debate. Unfortunately this debate is all too often exceedingly emotional, partisan, full of fear-mongering, apocalyptic visions invented to scare people and emotionally manipulate them to make them accept everything people in power want to implement in response to these challenges. And it is often the case that real and important questions, as well as good, reasonable ideas for solutions get completely drowned in this entire noise, in this media hype.

There is a lot to study and talk about regarding this problem. I was just trying to hallmark some important issues and make some important, in my opinion, points. There is a widespread opinion that governments should play a central role in the entire process of tackling climate change and restructuring our energy industry. This is, in my opinion, a very dubious and dangerous view, especially if it were to entail unrestrained increase of their governmental powers, without a proper concern on economic stability and growth, and without a proper balance in decision-making. Nobody should have power to unanimously dictate solutions here. Nobody owns the science, nobody is entitled or even able to make predictions with absolute certainty. Science on these problems is not absolutely settled and probably won’t ever be. It’s all based on computer models. Basing on my knowledge of the methodology of science I would say that the certainty of what is going to happen in 100 years is not greater than our certainty regarding events that happened on planet earth 50-60 million years ago. There are so many things we don’t know and can’t predict.

We are not omniscient. Human cognition is always limited. But the world will not end in 2030 or 2050; there is no scientific, nor any other rational knowledge that would suggest anything like that. That kind of ‘predictions’ are typically based on misrepresentation of facts, ignorance and fear. Where our knowledge ends, our faith begins. According to some of our biblical commentators, it was not only arrogance that caused the ancient people to build the Tower of Bavel; it was also, if nor primarily, their disbelief: they did not believe in the Divine promise that there would not be another flood. They rejected faith in God’s covenant with mankind and therefore built a civilization that has collapsed. Let us be mindful and let us not repeat their mistake. We have more time to decide; more than we typically think.