Religiousness in a Dialogue with Reason 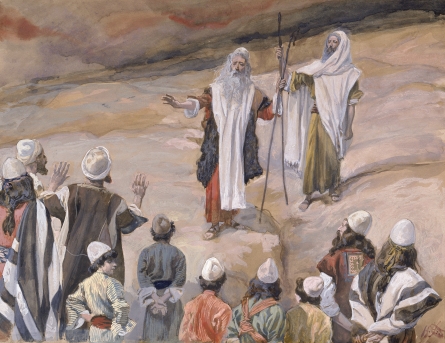 In this week’s Torah portion we find the story of Moses’ father-in-law, Yitro, who after having heard about everything that God has done for Moses and the Israelites by bringing them out of Egypt decides to join Moses and the people of Israel. So he comes to the desert along with Moses’ wife and two sons whom Moses has previously sent away and left in Egypt.

The next day after his arrival Yitro sees Moses seating in the desert from morning until evening surrounded by a crowd of people. Seeing all this, he asks Moses:

“What is this thing that you are doing [alone] to the people? Why do you act alone, while all the people stand about you from morning until evening?” Moses replied to his father-in-law, “It is because the people come to me to inquire of God. When they have a dispute, it comes before me, and I decide between one person and another, and I make known the laws and teachings of God.” But Moses’ father-in-law said to him, “The thing you are doing is not right; you will surely wear yourself out, and these people as well. For the task is too heavy for you; you cannot do it alone. Now listen to me. I will give you counsel, and God be with you! You represent the people before God: you bring the disputes before God, and enjoin upon them the laws and the teachings, and make known to them the way they are to go and the practices they are to follow. You shall also seek out from among all the people capable men who fear God, trustworthy men who spurn ill-gotten gain. Set these over them as chiefs of thousands, hundreds, fifties, and tens, and let them judge the people at all times. Have them bring every major dispute to you, but let them decide every minor dispute themselves. Make it easier for yourself by letting them share the burden with you.” (Ex 18:14-22)

The first question that came to my mind after I’ve read this passage this time was: Why wasn’t it God, with whom Moses continuously talked to, but rather his father-in-law who gave him this very reasonable and practical advice? This is not a historical question about why it happened this way etc. This is a question concerning the message contained in this thread of this Biblical story.

One possible answer could be as follows: this story shows the value of practical, human knowledge and common sense, also in the context of the revelation of Divine teachings. This advice of Moses’ father-in-law, a Midianite priest, a man who just a short while ago was living outside of the whole practical and religious context of Moses’ and the Israelites’ life – his advice stemming from his knowledge and experience proved to be very valuable, if not crucial for their future fate on the desert.

The situation was similar in later times and in modern times it’s still this way when it comes to the relationship between religion and science and practical knowledge. Even though our religion contains a very comprehensive collection of various wisdoms and rules of conduct and behavior, in order to live sensibly and happily we also need knowledge coming from outside of our religious tradition.

Everything seems simple and obvious – of course only until there appears… a conflict between religion and a different kind of knowledge, for example science. This issue is often being mentioned as one of the main reasons why people are leaving religion. However, I’d like to clarify one thing: actually there is no such thing as a conflict between religion and science. What people usually have in mind when they bring this up is the conflict between the Christian religion, especially some of its specific dogmas or concepts, such as for example the Resurrection or creationism with universally accepted scientific theories.

The reason for this conflict is first of all an utterly literal understanding of the stories found in our Holy Scriptures. Our religious tradition remains quite skeptical about this completely literal reading – the most skeptical of all Abrahamic religions. Literal understanding (pshat) is the simplest and “lowest” kind of understanding of our Biblical stories. Our sages identified three additional, deeper levels of understanding of our writings. They are: remez, i.e. hints – a method aimed at seeking the allegoric (hidden or symbolic) meaning which goes beyond the literal meaning; drash, i.e. questioning or searching for – this is the next method thanks to which we can reach for example meanings hidden “between the lines” (or actually we are reconstructing them); and finally sod, which means “secret” – thanks to this method we can reach the deepest, mystical dimensions of our texts – this is done for example in the Kabbalah. None of these higher levels actually entail asking whether that which the stories talk about “really happened” (which is admittedly an interesting undertaking, but that is not the point). Categories which are useful on these levels of textual understanding are message, wisdom, sense and meaning of a given Biblical story.

At this level religion becomes, just like ethics does due to its normativity – an area of autonomous discourse which is governed by different laws than other areas. This is a level of understanding which cannot be “debunked by scientific discoveries”. On the contrary, scientific discoveries can enrich the contents of our texts as they are understood on these levels. For example, archeological discoveries increasing our knowledge about other ancient political and religious cultures enrich our knowledge about how our religion, spirituality and religious laws were formed. This is not likely to turn us into atheists, but rather more conscious believers.

The real threat to our religious tradition is not genuine science, but rather various modern pseudoscientific doctrines, which, contaminated with different ideologies, undermine the foundations not only of our religion, but of science as well, of the purpose of any kind of methodology, of fundamental human cognitive powers and finally of rationality as such. From 1929 up to 1964 the whole field of biology in USSR, both at the university and the agrarian level, was dominated by the theories of the agrobiologist and agronomist, Trofim Lysenko. Lysenko and his supporters divided science into two groups: the oppressive, bourgeois science, created in order to oppress the proletariat, and the emancipatory Soviet science, whose aim was to support and elevate the oppressed social classes. According to Lysenko bourgeois theories contaminating science included concepts such as natural selection, Mendel’s laws – rules of passing on hereditary traits, and even the existence of genes and chromosomes which he and his supporters called “bourgeois constructs”. In the place of natural selection Lysenko introduced natural cooperation “between living systems”, and in the place of gradualism – revolutionary leaps, which meant for example the biological, spontaneous transformation of weeds into rye, rye into wheat and wheat into barley. Of course, whoever dared to disagree with Lysenko’s theories was accused of being “an agent of international fascism” and was sent to a gulag, if not shot on the spot. The implementation of Lysenko’s theory in Stalinist economic plans and in Mao Zedong’s Great Leap Forward led to massive crop failures as a result of which 50 million people starved to death.

In our contemporary world in the era of the uncontrolled transfer of information there is no shortage of “Lysenkoisms” – on the contrary, they are experiencing a true renaissance. Among them there are concepts which are viewed as completely innocuous, such as the theories of radical social constructivists who deny the existence of human nature or claim its absolute plasticity (actually the Communists were radical constructivists, since they believed that human nature can be changed by means of a radical transformation of social structures; and also the Nazis, who believed in the transformation of human nature as a result of racial segregation). Such theories are not only false and unsupported by any scientific knowledge; they also contradict the foundations of our religion, which at its core has the concept of human nature which can be changed only by God. Other contemporary “Lysenkoisms” include the Derridian phallogocentrism and other logocentrisms, i.e. concepts claiming for example that logic is a patriarchal instrument serving to impose order on nature etc. From a scientific standpoint the claim that reality has a rational and logical structure is not a metaphysical assumption, but rather a methodological postulate which allows us to increase our knowledge about various dimensions of our reality. We must assume that reality is rational if we are to understand it even a little. Without such postulates we wouldn’t be able to form a rational and verifiable knowledge thanks to which we are changing our world and making it a better place nearly on a daily basis.

Therefore, the enemy of religion is not reason or knowledge, but the arrogance and fanaticism of uneducated people. As religious people, we should always look for a platform on which religion and reason (science) can cooperate. We should by no means accept everything that human minds come up with in a given century or decade. We should be skeptical about any kind of knowledge which is not supported by a thorough methodology and experimentation. Everyone makes mistakes, and so did Moses. But God wanted to save Israel and bring them to the Promised Land. That is why he sent Moses his father-in-law, Yitro, so he could help him with his knowledge and experience.