Take matters into your own hands 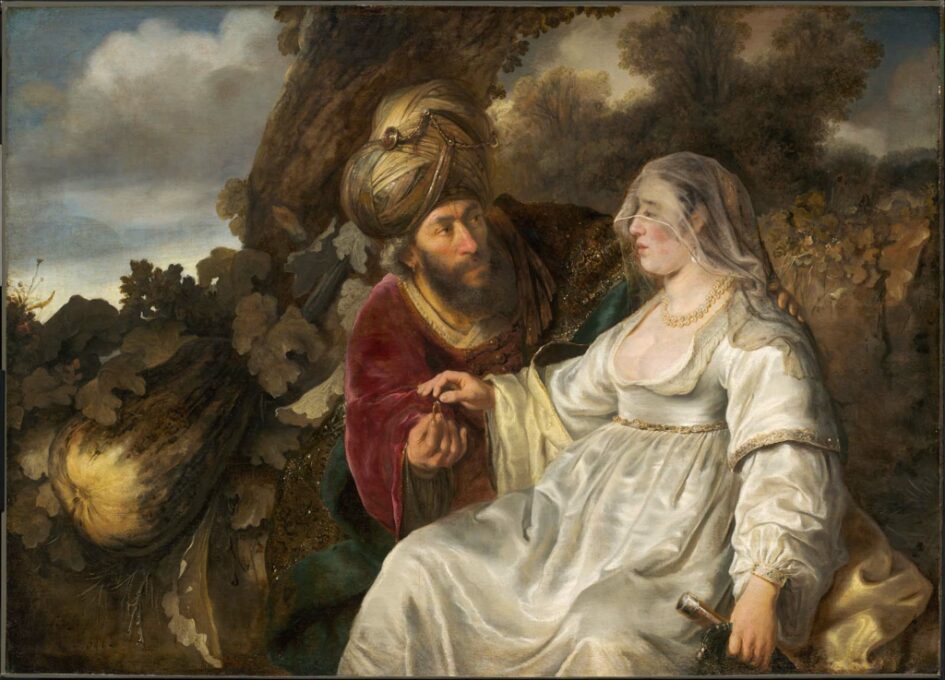 And Tamar was told, “Your father-in-law is coming up to Timnah for the sheepshearing.” So she took off her widow’s garb, covered her face with a veil, and, wrapping herself up, sat down at the entrance to Enaim, which is on the road to Timnah; for she saw that Shelah was grown up, yet she had not been given to him as wife. When Judah saw her, he took her for a harlot; for she had covered her face. So he turned aside to her by the road and said, “Here, let me sleep with you”—for he did not know that she was his daughter-in-law. “What,” she asked, “will you pay for sleeping with me?” He replied, “I will send a kid from my flock.” But she said, “You must leave a pledge until you have sent it.” And he said, “What pledge shall I give you?” She replied, “Your seal and cord, and the staff which you carry.” So he gave them to her and slept with her, and she conceived by him. (Gen 38:13-18)

At first sight Tamar’s behavior may seem bizarre, if not downright repugnant. However, if we take into consideration the cultural realities of the world she lived in, we’ll recognize that her actions served a certain aim and were in fact rational. Women who did not have children had a much lower status than women who have become mothers. Even many centuries later, in Mishnaic and subsequent times (the first centuries of the Christian era) the value of a woman was determined by whether she was fertile, and the only way to prove that was by having a child. Therefore, Tamar needed a son. Her first husband, Er, had died before he was able to make her pregnant. His brother, Onan, is evading the obligations he has towards his brother’s wife according to the tradition of the Levirate marriage (and it was for this sin that he faced the most severe punishment, and not for onanism, as it is still commonly believed.)

Her father-in-law, Judah, refuses to provide her with any further help. In such a situation, when all the men close to her are shunning their responsibilities, Tamar undertakes radical measures to secure what she believes in and what she deserves. One may not like the method she chose, but I believe we can admire her for her courage, shrewdness and determination in her struggle against certain social standards which existed at the time, as expressed in the following verse:

Then Judah said to his daughter-in-law Tamar, “Stay as a widow in your father’s house until my son Shelah grows up”— for he thought, “He too might die like his brothers.” (Gen 38:11)

In addition, her actions have serious further consequences: Tamar exposes the hypocrisy of Judah, who at first condemns her to death – he orders that she be burnt alive, but afterwards he completely changes his mind when it turns out that the children which Tamar is carrying in her womb are his own. Judah caves in under the pressure exerted by the circumstances, admitting that Tamar behaved more justly than he did, for which he  ultimately deserves praise. And, most importantly, Tamar bears two sons: Perez and Zerah, and King David will in fact descend from the line of Perez. Perhaps this is precisely the reason why rabbinical tradition treats Tamar with respect and praises her, comparing her to the matriarch Rebecca. Midrash Bereshit Rabbah even goes as far as to say that God had purposefully sent an angel whose job was to make sure that Judah would choose Tamar dressed as a harlot instead of a random harlot whom he could have met that day.

Translation from Polish by: Marzena Szymańska-Błotnicka