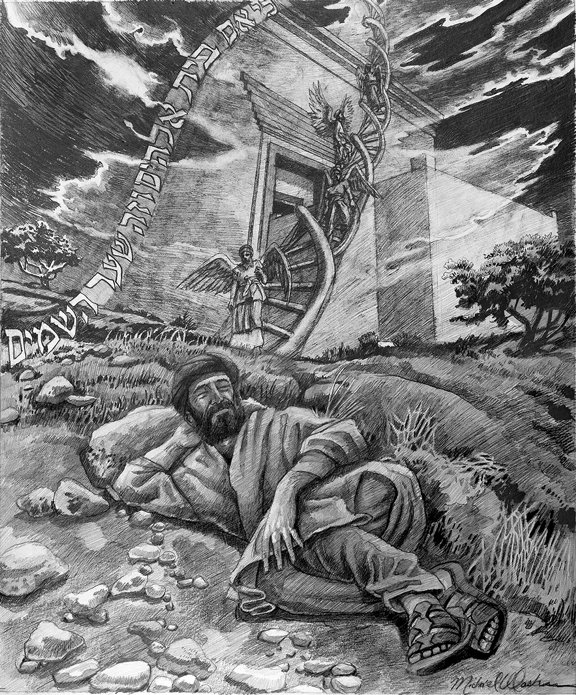 The Torah portion for this week starts with the story in which Jacob leaves his hometown of Beersheba and journeys to Charan, a major ancient city in Upper Mesopotamia (today’s southeastern Turkey.) On this supposedly pretty long journey he encounters a certain place and sleeps there dreaming of a ladder connecting heaven and earth with angels climbing and descending on it; God appears and promises that the land upon which he lies will be given to his descendants. In the morning, Jacob raises the stone on which he laid his head as an altar and monument pledging that it will be made the house of God. In Haran, Jacob stays with and works for his uncle Laban tending his sheep. He then marries two of Laban’s daughters – Rachela and Lea – in exchange for 14 years of work.

The story continues but let’s stop here. When God promises Jacob that He will bring him to the Promised Land He also promises him His divine protection:

Remember, I am with you: I will protect you wherever you go and will bring you back to this land. I will not leave you until I have done what I have promised you. (Gen 28:15)

This promise of protection seems unconditional but in reality it is not exactly the case. It is dependent on what had happened in Jacob’s past and his will to actively participate in the fulfilment of the divine plan for him. Let’s look at the circumstances under which this promise was made. Jacob went to Haran fleeing from his brother Esau who hated him and wanted to kill him after Jacob took his birthright. This is noted by Rashi who says that God promised to protect him because he was in terror of Esau and Laban. But not only Jacob’s social conditions were difficult. It seems that almost nothing in his life is in order at this particular time. He is spending the night in unwelcoming wilderness, sleeping under the open sky, with a stone under his head. Jacob describes the place using the Hebrew word norah, which means dreadful, scary, fearful, but also often translated as awesome, which is the case here. Even though the place is scary, Jacob strongly feels divine presence in it, so much so he ultimately names it shaar hashamayim – the gateway to heaven. This experience is a unique and exciting combination of fear and hope we feel anytime we encounter life’s difficulties and have at the same time deep and strong faith that we are completely right and that our decisions will lead us to our desired goals.

Jacob received divine protection because he took up a life’s challenge and he exposed himself to danger. A very similar situation occurred in the case of the expulsion of Hagar and Ishmael into the desert, whom God also took special care (Gen 21:14-21.) Another great example of divine help and support is God’s protection of the Israelites in the desert and conquering the Promised Land. It also follows exactly the same pattern: their protection was conditioned upon their actions aimed to advance the divine plan that was prepared for them.

Divine protection also does not mean that nothing unpleasant will happen to Jacob. What we can say for certain about God is that He is not “overprotective.” This is how we should understand divine protection in our lives: above all as help and support in difficult and challenging times. God protects those who take on challenges and make important and responsible decisions. God seems to be particularly supportive of those who act righteously, speak the truth and aim to implement divine plans in the world. Of course it doesn’t always seem to be the case and this issue has been a subject of debate in our tradition from the time of the Prophets during the first Temple period.

In a similar way we should understand our support, help and protection for people close to us and the people around us. There are relatively very few human individuals in the world that deserve protection all the time and in every matter. Every adult, mature human being should be able to be independent and responsible for his or her own life. Thus all kinds of systemic protection should be, in my opinion, limited only to certain cases (maybe except one idea: people should generally have some systemic protection against their own governments). However, the idea that some people or some groups of people in modern societies should be protected against every thing, act or message that they find unpleasant is preposterous. Not just discomfort, but in fact, suffering is an integral part of human life. People should be exposed in order to learn how to cope with life challenges, difficulties, unpleasantness and at time cope with suffering themselves. At this time in history, this idea is greatly underestimated in the West, at least in the field of education and upbringing. Suffering often brings important meaning to human life and some good outcomes. It is one of the most important sources of human knowledge and wisdom. These are ideas that religious minds have been teaching since ancient times. Any form of protectionism that tries to eliminate any possibility of suffering, limits not only human experience but it also limits maturity, knowledge and true wisdom.