The Humiliation of Joseph 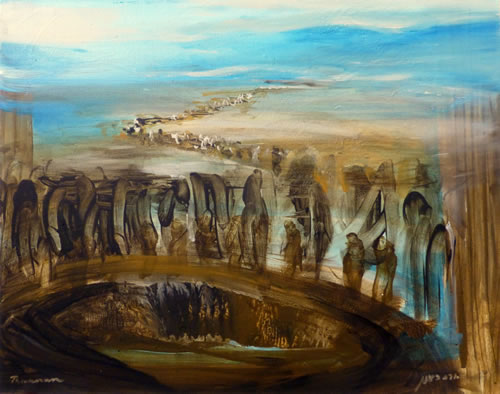 The Torah portion for this week starts with the story of Jacob settling in Hebron with his twelve sons. His favorite son is seventeen-year-old Joseph, with whom his brothers are jealous for the preferential treatment he receives from his father. To make matters worse, Joseph relates to his brothers two of his dreams which foretell that he is destined to rule over them which obviously increases their envy and hatred. At first they plan to kill him but instead humiliate him and sell him into slavery in Egypt.

We can only image the pain, grief, sense of hopelessness and anger Joseph experienced. In similar situations people, depending on their temperament, want revenge, to reprimand and/or seek justice. In the Talmud, tractate Bava Kamma (83b and the following pages) the rabbis debate the famous, ancient “eye for an eye, tooth for tooth” law. It is likely that this law lost its literal legal implementation at the beginning of the Second Temple period and certainly wasn’t in place at the beginning of the Christian era. We know that from Mishna, where it is replaced by a set of laws concerning various compensations for various damages. The code starts with the general law:

One who injures another is liable to pay compensation for that injury due to five types of indemnity: He must pay for damage, for pain, for medical costs, for loss of livelihood, and for humiliation.

This is later elaborated in details in all the following mishnayot of chapter 8. The Talmud (Gemara), however, starts with putting a question mark to the very idea of paying compensation instead of following the biblical law literally. Then the rabbis analyze other cases of damage (like those done on animals or property.) After finding several justifications for not following it literally, they come to the conclusion that monetary compensation for loss is the most lawful option given paying for damage with damage is actually impossible since it is impossible to repay with exactly the same damage. In this way the Mishnaic law is restored and it is given firm justification and further elaboration.

A few pages later (Bava Kamma 86b) the rabbis debate a case which is particularly relevant to our biblical story: humiliation.

When Joseph came  to his brothers, they stripped Joseph of his tunic, the ornamented tunic that he was wearing, and took him and cast him into the pit. The pit was empty; there was no water in it.

Putting aside our biblical story, the rabbinical laws regarding humiliation (like shaming someone publicly, exposing someone’s nakedness or destroying their reputation) are quite interesting. To give you a little taste, here is a short part of the Gemara:

As we can see already in this passage, the rabbis carefully analyze many circumstances in which the act of humiliation took place. They also take into consideration the psychological and social factors, i.e. whether the essence of humiliation is just a feeling of embarrassment or is it social disgrace seen by others. They conclude that the law regarding it should be based on objective evidence of harm rather than on the feelings of the victim. For this reason they, for example, exclude insane/mentally ill people from the right to compensation for being publicly shamed/humiliated, claiming that these people are already humiliated par excellence and no further damage can be (practically) done to them. It may seem brutal or even inhumane for many contemporaries, but I believe that there were some practical reasons behind this law: 1) it was difficult to define the boundaries of responsibility in this case (due to lack of organized institutions taking care of such people) and 2) a mentally ill person could theoretically come up with endless financial claims.

Coming back to our biblical story, Joseph didn’t have any means to sue his brothers for all the pain, humiliation and harm they had inflicted upon him. In a sense, human courts weren’t helpful as they didn’t exist. They also fail, of course, when they do exist. Joseph had to endure all the trauma and suffering in the terrible conditions of an Egyptian prison, for a long time, until he received his final compensation from the higher, Divine court. In my opinion, this made his further act of forgiveness possible and that’s one of the messages hidden between the verses of this biblical story. That’s the reason I believe that we should never disconnect forgiveness from a sense of justice experienced in particular situation. In the majority of cases, without satisfying the latter, the real and true forgiveness (not to confuse with an act of simply forgetting) is not actually possible.